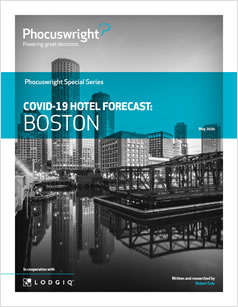 In our exploration of various global gateway markets, we thought it would be interesting to look at a market that is relatively close to one we previously analyzed.

Given the storied rivalry between the New York and Boston sports and social communities, comparing the impact of COVID-19 on the prospects for their respective hotel business sectors seems appropriate.

The impact of the coronavirus pandemic on New York has been widely covered, but Boston actually recorded its first case much earlier, and experienced an early high-profile super-spreader event.

While COVID-19 has been largely associated with its devastating spread through senior living facilities, the Boston market provided a cautionary example of how group meetings can facilitate the spread of the virus. On February 26, global biotech pioneer Biogen held its annual, two-day leadership conference at the Marriott Long Wharf, with 175 people in attendance.

Ironically, for a company whose mission is to eradicate disease, Biogen meeting attendees introduced early COVID-19 cases in Indiana, Tennessee, North Carolina, New Jersey and Washington, D.C. Attendees returning to Germany, Norway, Switzerland and China tested positive, with others suspected in Austria and Argentina. A photographer attending the event transmitted the virus to 15 of the 50 people attending a friend's birthday dinner.

On March 12, the Marriott Long Wharf closed. By March 17, more than half (100) of the 179 confirmed cases identified in Massachusetts were linked to this single conference.

Until an effective antiviral treatment or vaccine become available for broad distribution, hotels - and the meetings and events industry as a whole - cannot reasonably expect to return to what was previously considered normal. The new normal will require explicit, overt measures to demonstrate that the health and welfare of hotel staff and attendees are being protected.

In March, Boston ended the month seeing a room occupancy decline of 50%, average daily rate (ADR) drop of 22% and revenue per available room (RevPAR) falloff of 57% compared to the previous year. These compared slightly favorably to March month-end stats for New York, which saw declines of 55%, 23% and 62% for the comparable metrics.

Looking a bit deeper into the weekly splits, the story was a bit different. Boston started March in better shape than New York across the board, but the downward slope accelerated much more aggressively, with the YoY RevPAR drop for both destinations falling 88% for the final week of the month.

Interestingly, as New York's healthcare system bordered on overload in early April, New York hotel occupancy increased due to the housing of essential workers and some properties serving as quarantine quarters. Boston not only successfully flattened the curve, but the leisure travel ban there contributed to YoY occupancy falling off 11 points further than New York in the second week of April.

The acceleration of Boston's demand drought through April produces a bottom resulting in a 97% YoY cratering of RevPAR. With hotel closures mitigating some of the negative impact of occupancy declines (which are reported only for operating properties), ADRs continued to fall in April, resulting in an average 53% decline for the month. A good example of this trend was STR reporting a 56% YoY drop the week of April 11 - down 12 points compared with the previous week.

How cash-strapped hoteliers choose to deal with pricing under a no-demand environment will dictate the depth of RevPAR declines and the length of the runway required for recovery. The Global Business Travel Association (GBTA) this week recommended that hotels and corporations extend 2020 corporate rate agreements into 2021.

Differences in YoY RevPAR variance forecasts between the pre-COVID-19 forecast (week of March 1) and the most recent April 26 forecast show a now typical 90-point fall-off for April and May. Some potential good news for Boston is that modeling for 2Q20 shows continual improvement in May and June from the April bottom.

COVID-19 has now conditioned observers to discern differences between horrific, terrible and awful - which are accurate descriptions of Boston's forecast hotel performance over the months of April, May and June.

The aggregated 86% YoY RevPAR decline forecast for 2Q20 is empirically bad, but the trend produced by the model indicates that a potential for recovery exists.

Again, as exhibited in other markets, the outcome of government authorities making appropriate decisions to preserve life and public health have a detrimental impact on the performance of the hotel industry. As roughly half of U.S. states (excluding Massachusetts) begin to reopen their economies in early May, the delicate balancing act between the forces desiring economic recovery and those urging greater caution will begin to play out.

The model reflects Boston's opportunity to begin recovering as May ends and June begins, if a reopening process can be successfully structured. A key consideration (and current unknown) is the timing of repeal of the leisure travel ban and/or discouragement of out-of-state travel.

A few additional statistical snapshots of the Boston market highlight the incredible impact of the pandemic on the hotel industry. While RevPAR is considered the common metric to compare performance across all types of hotels, total revenue per available room (TRevPAR) incorporates revenue from additional sources such as food and beverage outlets, banquets, meeting facilities and recreation/spa departments for full-service hotels. Even more importantly, gross operating profit per available room (GOPPAR) is a key metric used by hotel owners to measure profitability.

While these metrics fall beyond the scope of our demand disruption forecasts, they deserve consideration. For the month of March 2020, STR reported TRevPAR for Boston falling 73.1% YoY. This figure is approximately 15 points worse than the comparable RevPAR figure for the month. Even more dramatic was the precipitous fall in YoY GOPPAR, which declined 147% in Boston.

This profitability dimension exacerbates the uncertainty for hotel owners as the duration of lockdowns continue. Like most international gateways, central Boston features both high-inventory density and a greater relative share of upper-upscale and luxury hotel product, which will tend to slow its recovery. The meetings business, now predicted by the American Hotel & Lodging Association (AH&LA) not to recover until sometime in 2021, puts further downward pressure on occupancy forecasts.

Mid single-digit occupancy, low double-digit occupancy and under one third of rooms occupied are hardly conditions that any hotelier would ever want to experience, or in fact has ever experienced. The model's relative increase in the occupancy forecast for June, a month in Boston that would normally see occupancy around 90% (and ADRs exceeding $300), will bring some welcome relief. However, it will still apply intense pressure on hotel profitability, which has traditionally required somewhere around 50% occupancy to achieve break-even performance.

It should be noted that, when comparing our weekly forecast occupancy snapshots, none have yet resulted in any upward adjustment trend in the forecasting.

To borrow a sports analogy, it appears that we may only be approaching the end of the early innings in the hotel industry's battle with COVID-19. The coming weeks will provide some answers as U.S. states experiment with reopening. At this point, those outcomes lie well beyond the data sets used to develop these forecasts, so we look forward to learning more as new information becomes available.

As expressed by Hilton CEO Chris Nassetta at a White House meeting on April 30:

"… our customers are saying they're looking for the government, both state and federal government, to focus on testing so that they understand, you know, what real mortality rates are," adding that guests "want to know that people are being responsible. Right? They want to know that we are doing the testing, the social distancing."

If the U.S. population continues to exhibit personal responsibility for social distancing and governmental authorities are able to support the necessary testing and contact tracing, guest uncertainty will subside.

We are hopeful that the Boston hospitality industry will be able to achieve the forecast gains predicted by the model to begin its recovery. Again, in comparison to New York City, our earlier modeling predicted occupancies to be 10 points higher than Boston for the month of June, so they have considerable ground to cover.

Hopefully, both Boston and New York will soon be able to tout - with equal fervor - their performance in recovering from the coronavirus pandemic, and return to their favored pastime of making the other city painfully aware of their own civic pride. 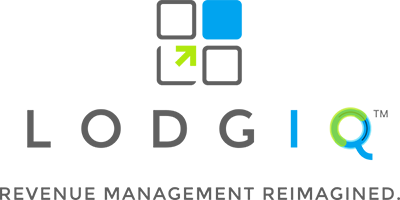